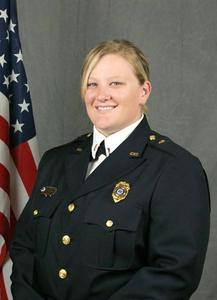 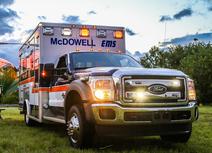 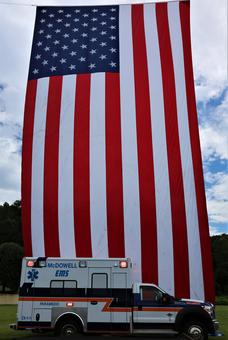 McDowell EMS Completes 4-Station Building PlanIn 2017 Emergency Services Director William Kehler submitted a proposed plan to replace EMS Station 1, which is located along South Garden Street in Marion.  The station was built in 1978, shortly after McDowell EMS was formed and is now closed after 44 years in operation.  The former station closed on June 2, 2022.  The new facility which houses all ES administrative offices and EMS crew quarters for the main facility is located at 129 Barnes Rd. in Marion.The four-station called for constructing two stations, one on the south end of Marion and the other on the north end around the Hankins Rd. corridor.  By constructing EMS stations on the outskirts of Marion, the agency improved response times to emergencies that occur in Dysartsville, Glenwood, Sugar Hill, Nix Creek, Pleasant Gardens, Hankins, Woodlawn and North Cove, while maintaining a response time of less than five minutes into the downtown area.  An internal study in 2017 found that 88% of the calls serviced by EMS Station 1 would have a decreased response time under the four-station plan.  On average it takes an EMS ambulance five minutes to reach the main intersections on the 221 Bypass, coming from the South Garden Street location. Numerous factors contribute to this delay including red lights, pedestrian crossings, and traffic congestion.   88% of the calls ran by Station 1 are outside the downtown area.

McDowell County EMS employees have worked 9 years without a lost time incident. The culture of safety change began in 2010 with the agency changing over 23 different operational procedures and implementing new training and physical fitness requirements for employees. The agency's safety record has gained state and national attention and is believed to be one of the longest-running safety records for any EMS agency.

HISTORY
McDowell County Emergency Medical Service began its operation on July 1, 1977. EMS began its operation with a total of 16 employees with 5 employees working each shift. In the early days of the organization, the crew quarters were located in the County Administration Building. In 1978 EMS moved into a new station located on South Garden Street in Marion.  In 1989 a second station was added in the Old Fort community. This station was located within the Rocket Building at Old Fort. In 2002 McDowell County Board of Commissioners approved the construction of a new Old Fort EMS Station on US 70 West in Old Fort. In October of 2010, EMS Station 3 was built through a joint project with the Nebo Volunteer Fire Department. EMS Station 4 was opened in March of 2021 on US 221 North in Marion.  On June 2, 2022, the new Emergency Services Headquarters was opened at 129 Barnes Rd. in Marion.

Today McDowell County EMS paramedics remain on the cutting edge of Emergency Medicine with access to state of the art medical equipment, medical protocols that meet national standards in emergency medicine, and training programs that provide excellent opportunities for professional development. McDowell EMS is committed to being an active player within the community promoting injury prevention programs and public awareness on a variety of health-related topics. In July of 2013, McDowell EMS implemented the first Community Care Paramedic Program in Western North Carolina.